THE IMMERSE OR DIE 3 BUNDLE 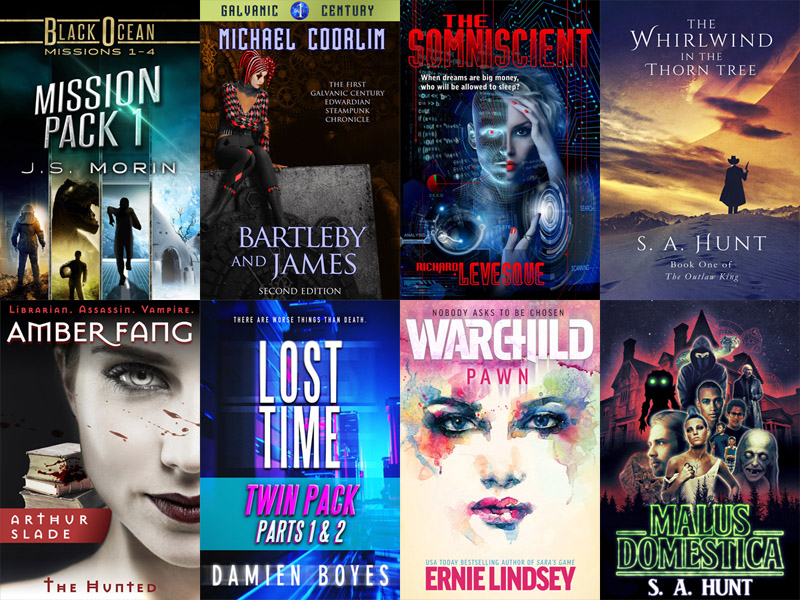 The Immerse or Die 3 Bundle - Curated by Jefferson Smith

The year is drawing to a close, so it's time to reveal the best books discovered this year by the ever-ruthless ImmerseOrDie challenge.

For those who don't already know about ImmerseOrDie, every morning I get on my treadmill for my forty-minute daily walk. In an effort to distract myself from the drudgery of treadmills, I do this in the company of a new-to-me indie novel. The hope is that I can get quickly immersed into the world of the story and stay there so completely that I don't notice the drudgery. To be fair, each book is given two mercies, but if I find myself interrupted by oddities in the writing, editing, or layout for a third time, I close the book, stop the clock, and then write up a report about what went wrong. (If you're curious, you can see all the reports or check out my distilled analysis of the 51 things that break reader immersion.)

After having done over 400 of these now, it seems that only about 10% of contenders are clean enough to hold me all the way through my workout. And that makes the survivors rare enough that I do my best to celebrate the victories and call more attention to them, for the benefit of both the authors and of any indie readers who are looking for new books to love.

But there's more to a book than just the first forty minutes. So those survivors are then put to a full-length test, and the ones that are found to tell an engaging story from stem to stern, and present it in a professional-quality package, are invited to participate in an ImmerseOrDie StoryBundle as well, the most recent of which is being launched today. This current collection will be available until Dec 22. for the low, low price of "whatever you want to pay," and in addition to supporting some great authors, a portion of proceeds will also go to supporting two great literacy charities.

The books this time around are:

The first four installments of a rollicking space adventure serial. Plus wizards. Just when the space hijinx start to settle down, the wizard drops in to kick the story on its ass. If you like your adventure quarrelsome, audacious, and unpredictable, then the good ship Mobius has got you covered.

The Somniscient, by Richard Levesque

Have you ever wanted to be able to control your dreams? Maybe even write the script? But if that became possible, who would bother to write their own? In this chilling exploration of the near future, an entertainment technology giant dominates every facet of human life: from the dreams you dream, to the apps you use to talk about them. They even control the very currency of exchange. So the burning question now is: when dreams are big money, who will be allowed to sleep?

Bartleby and James, by Michael Coorlim

Start with a Sherlockian detective and then double down on the science by giving him a sidekick who's a little less Watson and a lot more Tesla. Throw in an intriguing villainess to lead the two on a merry chase, and you end up with something that seems entirely of that era: a mystery that invites you to tea and then remembers to send a thank you note afterward. Think of it as "A Curious Gentleman's Guide to the Age of Wonder."

Whirlwind in the Thorn Tree, by SA Hunt

One of the promises of indie fiction is that it can bring us stories that just don't fit into conventional molds, and this is one of the books that actually delivers. In fact, this was the very first book I read that convinced me that indie authors could go toe-to-toe with the majors. If you're looking for a bold new world of fantastical adventure that harks back to Lovecraft and L'Amour rather than Tolkien and Lewis, then this is the two-fisted, gunpowder smackdown that will take you there.

Miss Amber Fang is a smart and funny vampire librarian, raised with a strict ethical code: we only eat murderers, dear. And that, combined with her exotic vampire physiology, makes her the perfect candidate for an entirely different line of work: government assassin. Nobody ever suspects the librarian.

We've all seen the story of the hero whose consciousness is backed up on a computer drive and later re-animated into an unfamiliar world of the future. But what if he's reanimated the Tuesday after his death and charged with the murder of his wife? And then, what if he's reanimated again, only this time under the secret identify he used for surfing porn, and given the chance for revenge? I'll tell you what happens: awesome happens. Two versions of the same man, both investigating the same murder from different ends. And only one of them can be allowed to survive.

Consider a society where three fundamental forces are in seemingly perfect balance. Where do you pin your allegiance? To the local warlords who are trying to maintain order? To the secret societies who are trying to save the old world, but are still mired in the beliefs that caused the collapse in the first place? Or to the young idealists who don't understand any of that, and just want a chance to build lives for themselves without having to choose sides? No matter how you slice it, someone has got to lose.

Real horror, to me, is when terrible things happen to people I know and like. Especially if I can clearly see the long, slow, but inevitable arc of their lives as they begin to slide straight toward the distant wood chipper. Hunt masterfully shows us an early taste of what's at stake and then settles in to let us get cozy with the family before he brings out the knives. And when he does, the results are chilling. Forget the hags of Eastwick and Oz. If you want your witches to be really scary, put 'em right there in your home town and have them serve cookies to your kids.

So there you have it. Eight champions of indie fantasy and science fiction, chosen through a grueling process and put here on the StoryBundle pedestal for the world to enjoy. These are the authors who seem to have the whole package, who are walking the extra mile to ensure that their stories sizzle, their prose is tight, and their layouts glitter.

If you have a reader on your Christmas list this year, why not give them eight great books they haven't discovered yet? In addition to the bragging rights for introducing them to their next favorite author, you'll also be supporting charity, and giving a much-appreciated boost of encouragement to some of the most promising as-yet-unknown writers in the field. A single gift that gives in ten different directions? How festive is that? But of course, if you're a grinch, you could always just get it for yourself and keep it a secret. :-) – Jefferson Smith

The initial titles in the Immerse or Die 3 Bundle (minimum $3 to purchase) are:

If you pay more than the bonus price of just $12, you get all four of the regular titles, plus four more!