THE VISIONS OF THE FUTURE BUNDLE 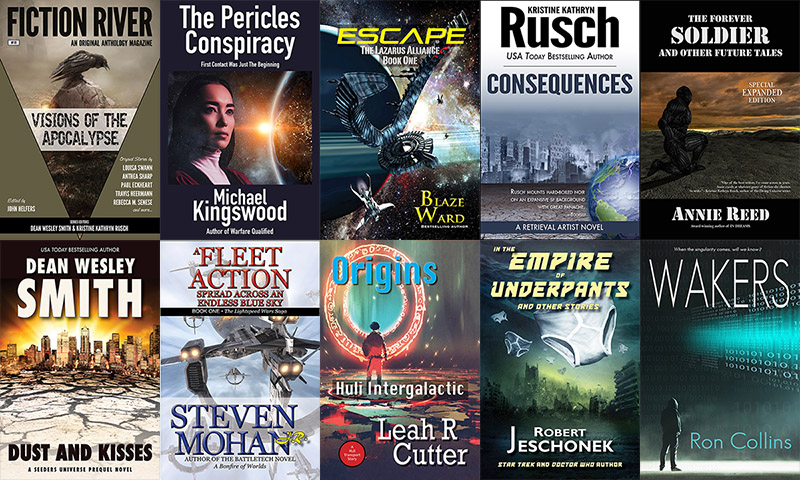 The Visions of the Future Bundle - Curated by Dean Wesley Smith

All Kinds of Different Futures

I grew up reading science fiction way back in the 1950s. And from those early years, I loved it, how it showed me possible futures, places to escape to, wonderful visions, and dark possibilities.

Science fiction took me out of a bad childhood and let me escape, not only from my home, but from this planet. And then, when I was in high school and college, Star Trek allowed me to escape into a wonderful future of hope and dreams, where the good guys won.

To say I loved science fiction would be a gigantic understatement.

And for the last six decades, I have continued to love and read and watch science fiction in all forms, and write my share of it as well, including back in the 1990s a lot of Star Trek.

So when chosen for the wonderful task of putting together a bundle of stories with the title Visions of the Future, I got excited. I wanted to find writers who could take me into their visions of what they saw the future to be.

My first stop, when looking for writers, was Robert Jeschonek, maybe one of the most creative minds working in modern science fiction.

Robert Jeschonek is the bestselling author of more books, comics, and short stories than he can count. One reviewer called him "the love child of Tim Burton and Neil Gaiman." Yup, I agree with that completely.

And it just so happened that Robert had an exclusive anthology for this bundle with the title story being maybe one of my all-time favorite short stories. "In the Empire of the Underpants."

I mean, seriously, how can you beat a story about sentient men's underwear looking for its reason for being. A vision of the future that only the wild mind of Robert Jeschonek could come up with.

Next, I went to my wife, New York Times bestselling writer, Kristine Kathryn Rusch, the most awarded science fiction writer working today. She also has written hundreds of novels, comics, and short stories, but is more known for her award-winning science fiction. I talked her into giving me Consequences, a fast-paced novel in her amazing future Retrieval Artist series starting Miles Flint. Trust me, after you read this one, you will want to get the entire series.

Next, I went to two of the best former submarines officers who also write fantastic, fast-paced, and acclaimed science fiction. It seems that formally serving on submarines can really give you a sense of what it feels like to be on spaceships.

Award-nominated and acclaimed writer Steven Mohan, Jr. offered a fast-paced novel of a terrible future war, a fleet beset by corruption, and by murder. The novel, called A Fleet Action Spread Across an Endless Blue Sky, will keep you up reading late into the night as only Steven can do.

And secondly, 20-year veteran of the US Navy submarine force, Michael Kingswood gives us a novel full of action and intrigue called The Pericles Conspiracy. Another edge-of-your-seat book that is just almost impossible to put down.

So I had military science fiction and first contact fiction from two of the best writers working in science fiction, so I needed grand space opera next.

Bestselling writer Blaze Ward is one of the most prolific writers of science fiction novels working today in numbers of different series. He offered the bundle a brand new space opera that is book one in a new series called Escape: The Lazarus Alliance. Perfect space opera in all ways.

And exclusive to this bundle.

Blaze's wife, acclaimed and bestselling writer, Leah Cutter, offered a completely different take on space opera. A portal story, where magic takes over when physics fails. Only the portals can help them escape Earth and cover the vast distances to the stars. This book is the very beginning of this vast series. Origins: Huli Intergalactic is a book you don't want to miss.

Bestselling writer, Ron Collins has been in just about every major magazine in science fiction and he has been nominated for many awards, including in mystery. And he got a prize a few years back from Writers of the Future.

He offered the bundle an exclusive novel of a far future where autonomic intelligences do all the work. Wakers is an amazing novel, one you won't soon forget. Get it in this bundle first.

At this point I wanted more of a diversity of stories, so I turned to bestselling writer, Annie Reed. Annie has published acclaimed short fiction in dozens of different markets and has an exclusive to this bundle an expanded edition of The Forever Soldier and Other Future Tales. Nine fantastic visions of worlds to come.

After reading those stories, trust me, you will go searching for as many Annie Reed novels and stories as you can find. An amazing collection.

So, one major area of science fiction futures I was missing, and that was apocalyptic fiction. Just so happened that I had written a book that was a prequal to my Seeders space opera series called Dust and Kisses.

And then, lastly, for a dark assortment of different futures, I added in Fiction River: Visions of the Apocalypse. Fourteen stories by major writers that will fill out the bundle.

So set some time aside for some travels into some amazing futures. You will be very, very glad you did.

But wait, it does get better if you decide to support our fantastic charity AbleGamers.com. I hope you do. There is no better feeling than helping a great cause and then reading a great book.

Or ten books, as the case might be. – Dean Wesley Smith

If you pay at least the bonus price of just $15, you get all four of the regular books, plus SIX more books!