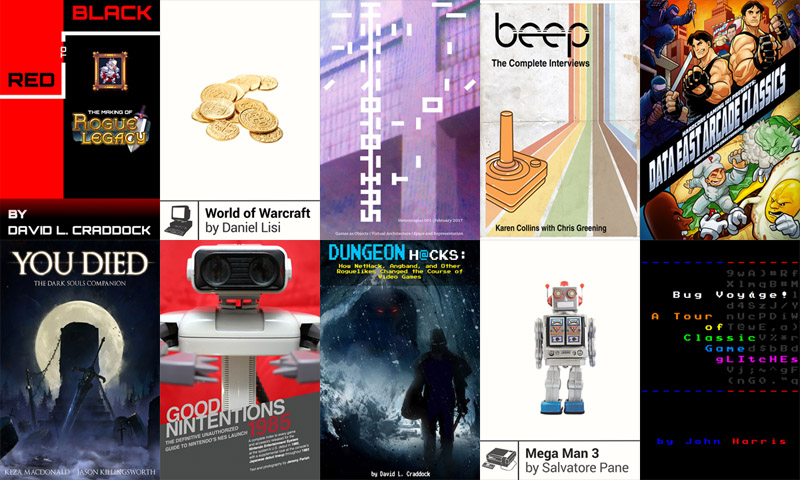 The basic purchase tier ($5 or above) for the Rogue Souls Game StoryBundle includes 'Beep - The Complete Interviews' from Karen Collins & Chris Greening, conducted for the acclaimed game audio documentary of the same name and featuring a ton of amazing interviews with notable Western and Japanese game audio greats. Also included is 'Boss Fight Books - Mega Man 3' by Salvatore Pane, an affecting personal history that's also a deep look into Capcom's all-time NES classic Mega Man 3, one of the trickiest but most rewarding platformers ever to grace Nintendo platforms.

Additionally available at this tier is 'Heterotopias 001', edited by Gareth Damian Martin, a clever inaugural issue of a zine focused on 'the spaces & architecture of virtual worlds' including insightful writing & art on Kane & Lynch 2, Tomb Raider & more. Finally, we also have 'Red To Black - The Making Of Rogue Legacy' by David L. Craddock, featuring interviews and analysis to work out just how the 2013 roguelikelike (!) got it right.

The higher-tier rewards - available at the payment tier of $15 or your local equivalent - is headed by 'You Died - The (Unofficial) Dark Souls Companion' from Keza MacDonald & Jason Killingsworth, a history of FromSoftware's majestic, tough as nails action RPG that's at the same time interviews with key figures from playing & translating it, plus a bird's eye view of the entire phenomenon. Plus you get 'Dungeon Hacks' from David L Craddock, an exemplary history book charts the rise of Rogue & its associated genre brethren with smartness and exactitude.

You'll also get 'Good Nintentions 1985' from Jeremy Parish, the story of the Nintendo Entertainment System's initial U.S. game line-up, with a plethora of newly taken pictures & screenshots, peppy analysis of the titles, and even a bonus section dealing with the Famicom's 1983 launch in Japan. Also available is 'Boss Fight Books - World Of Warcraft' from Daniel Lisi, an entertaining pop history where the author's personal run-ins with Blizzard's magnum opus match up with a history of the game itself, to delightful ends.

Finally, we also have 'HG101 Presents: Data East Arcade Classics' from Kurt Kalata & friends, dipping into a corner of the arcade universe that may surprise even experts, spanning Data East classics like BurgerTime to obscurities like Skull Fang & everything in between. And rounding things out is the StoryBundle exclusive 'Bug Voyáge! A Tour of Classic Game Glitches' by John Harris. Harris has delved deep into classic games - from Pac-Man to Galaga and beyond - to point out some amazing glitches, how you trigger them, and the underlying logic that makes them possible." – Simon Carless

The initial titles in the Rogue Souls Bundle (minimum $5 to purchase) are:

If you pay more than the bonus price of just $15, you get all four of the regular titles, plus SIX more!

Finally, the optional charity for this bundle is the Video Game History Foundation, a brand new non-profit organization dedicated to cataloging, digitizing, and preserving the history of video games. With digital archives like the U.S. NES Launch Collection already live, the organization fits in very well with the knowledge dissemination goals of the Game StoryBundle series, and we're proud to support it.

This bundle is available only for a limited time via http://www.storybundle.com. It allows easy reading on computers, smartphones, and tablets as well as Kindle and other ereaders via file transfer, email, and other methods. You get multiple DRM-free formats (.epub and .mobi) for all books, and .pdf for Beep, Bug Voyage, Good Nintentions, Data East Arcade Classics, Heterotopias 001, Mega Man 3 and World of Warcraft!